You say Kaiser, I say Kristus

You say Kaiser, I say Kristus 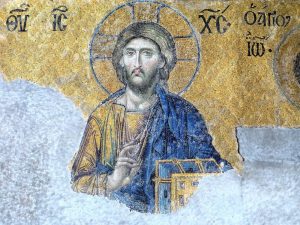 In some ways, ancient Jerusalem during the Roman era wasn’t too different from our current world. It was largely an orderly society with a variety of different people, cultures, views, and beliefs. Both pluralistic societies claim diversity and tolerance, but under Roman rule all citizens were also required to follow the rule of “Kaiser Kurios” (Caesar is Lord). In today’s society, Christianity is often viewed as being exclusive and narrow because of the primary belief that there is salvation in Jesus and no one else. “Kristus Kurios” (Christ is Lord).

The priests and the captain of the temple guard and the Sadducees came up to Peter and John while they were speaking to the people. They were greatly disturbed because the apostles were teaching the people, proclaiming in Jesus the resurrection of the dead. They seized Peter and John and, because it was evening, they put them in jail until the next day. But many who heard the message believed; so the number of men who believed grew to about five thousand.
Acts 4:1-4

Jewish leadership was greatly concerned with the Apostles’ teaching in general. They viewed it as a potential threat against their authority and it was also contrary to their views of their Messiah. Peter was telling people that Jesus was a Messiah for all, but the high priests, Pharisees, and Sadducees had their own version of the Messiah. Their Savior would be a private Messiah, one for the Jewish people who would free them from Roman domination. Adding to this was the revulsion Sadducees had regarding the whole concept of resurrection of the dead. No doubt, they wanted Peter to shut up.

Earlier, during Pentecost, 3,000 souls came to believe in Jesus Christ. This day, 5,000 more (or 5,000 total) became believers. The Jewish leadership at that time couldn’t keep Peter and John in jail for long. Too many people were following them and there would have been public outrage. From the Roman point of view, there were problems with this Peter guy also. Basically, the Romans said it was ok to follow different religions as long as everyone worshiped Caesar – which refutes the Christian tenant that Jesus claimed, “I am the way, no one comes to the Father but me.”

Then Peter, filled with the Holy Spirit, said to them: “Rulers and elders of the people! If we are being called to account today for an act of kindness shown to a man who was lame and are being asked how he was healed, then know this, you and all the people of Israel: It is by the name of Jesus Christ of Nazareth, whom you crucified but whom God raised from the dead, that this man stands before you healed. Jesus is

“‘the stone you builders rejected,
which has become the cornerstone.’

Salvation is found in no one else, for there is no other name under heaven given to mankind by which we must be saved.”
Acts 4:8-12

Just like in Chapter 3, Peter is admonishing the people and high priests for their role in Jesus’ crucifixion. As an answer to the high priest’s question by whose authority he healed the lame man, Peter in no uncertain terms proclaimed who healed the man. Peter and most of the other Apostles were rough around the edges and lacked a formal education. In the older patriarchal society of the Old Testament, these men never would had the confidence to step up. They never would stepped up except for being full of the truth from the Holy Spirit. In Christ, Peter and the Apostles gained a whole new system of identity.

Peter was not better or worse than anyone else. He was certainly not smarter or more educated than the people around him, and his self-worth was not based on works.

When they saw the courage of Peter and John and realized that they were unschooled, ordinary men, they were astonished and they took note that these men had been with Jesus. 14 But since they could see the man who had been healed standing there with them, there was nothing they could say.
Acts 4:13-14

I have no doubt that Annas, Caiaphas, John, Alexander, and other members of the high priest’s family, wanted nothing more than for these troublesome Jesus followers to go away, or worse. They would have totally dismissed Peter and his gang except for the healed lame man standing about 10 feet tall next to Peter saying, “Look at me!” There was nothing they could say in opposition. In the same way that Jesus, a poor uneducated carpenter from Nazareth, surprised the aristocracy with his uncanny knowledge and profound teaching of scripture, Peter made an equally surprising impression.

But the high priests had to put an end to this threat. They called Peter and John and forbade them to speak, teach, or do anything in the name of Jesus. What follows is one of the critical moments of this chapter.

But Peter and John replied, “Which is right in God’s eyes: to listen to you, or to him? You be the judges! As for us, we cannot help speaking about what we have seen and heard.”
Acts 4:19-20

The Holy Spirit was cruising through them. Peter and John’s response showed divine clarity and confidence. They were confronted by people who wanted to make their lives miserable. They were confronted with much better connected, more educated, and more intelligent people who could use their position to end their lives. But, Peter and John demonstrated that God comes before state. “Do we listen to you, or to him?”

In this story, the lame man is us. Apart from the miraculous power through Jesus Christ, there would be no healing of him. Peter admitted that the healing had nothing to do with him or any of the apostles. God doesn’t owe anyone. The lame man didn’t earn his healing any more than we have earned a perfect, promised future. Apart from God’s unspeakable grace, there is no salvation for us either.

All the believers were one in heart and mind. No one claimed that any of their possessions was their own, but they shared everything they had. With great power the apostles continued to testify to the resurrection of the Lord Jesus. And God’s grace was so powerfully at work in them all that there were no needy persons among them. For from time to time those who owned land or houses sold them, brought the money from the sales and put it at the apostles’ feet, and it was distributed to anyone who had need.

“There was not a needy person among them, for as many as were owners of lands or houses sold them and brought the proceeds of what was sold and laid it at the apostle’ feet, and it was distributed to each as any had need.”
Acts 4:32-35

The believers praying here buried the pride of their self-identity. Being in one heart and mind didn’t mean they agreed with everything their brother or sister did or said. It didn’t mean that they would have the same feelings about all things in life. It meant that to the bottom of their hearts, Kristus Kurios. Christ is Lord. Christian unity is distinctly different from worldly unity. Followers of Jesus have a common bond, common beliefs, and most importantly, a common future.

Through their common prayer and giving, they removed any selfish claims to personal superiority in favor of God’s grace. They showed that their new identities were not based on their status or through works, their self-worth came from the beautiful saving grace of Jesus Christ.

Key Applications:
In Roman-held Jerusalem, people were forced to worship Caesar. As a Jesus follower, it wasn’t possible to worship both. Either Jesus was who He claimed to be, the one God present before Abraham, or Jesus wasn’t telling the truth and he was equal to Caesar and all of other religious teachers. Today, some criticize Christianity as an exclusive religion because we claim Jesus is the only way to God. Believing Jesus is only way isn’t arrogant or exclusive, it just means we believe what He said.

Following Jesus Christ is the most inclusive path available. Some say that all religions allow good people to find God. That sounds all-inclusive but what about bad people. Christianity invites the good and bad. It’s an inclusive, exclusive truth.

“But the gospel of Jesus is a different kind of exclusivity…
because the gospel teaches that our acceptance with God is not based on anything about us… not our moral record, our education, our race, or our political viewpoint. God gives salvation”
JD Greear