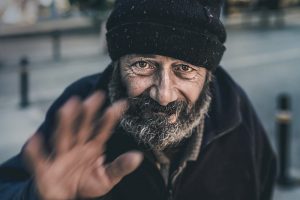 Whenever we think we’re in good shape, someone gives us a wakeup call. When we think we’ve worked hard enough, been good enough, or served enough, we’re reminded that it’s not our efforts that count. It’s not our opinion of ourselves that count. In Acts 3, the Gospel writer Luke tells us the miracle of the lame beggar. The message in this story shows us what does count. He highlights a dramatic spiritual turning in the lame beggar, in the crowd gathered at the temple, and in us.

One day Peter and John were going up to the temple at the time of prayer—at three in the afternoon. Now a man who was lame from birth was being carried to the temple gate called Beautiful, where he was put every day to beg from those going into the temple courts. When he saw Peter and John about to enter, he asked them for money. Peter looked straight at him, as did John. Then Peter said, “Look at us!” So the man gave them his attention, expecting to get something from them.

According to historians, the gate on the temple mount was a sight of grandeur. It was made of Corinthian brass, seventy-five feet high with giant double doors covered over with silver and gold. The temple gate was a highly visible location and the lame man felt his only option was to be supported in his current condition and live off of the charity of others. There was a strong tradition of alms-giving to the poor in Judaism. Many felt that it earned them points as an act of righteousness. What seems righteous to me was the fact that the beggar was carried to the temple gate on a daily basis.

Then Peter said, “Silver or gold I do not have, but what I do have I give you. In the name of Jesus Christ of Nazareth, walk.” Taking him by the right hand, he helped him up, and instantly the man’s feet and ankles became strong. He jumped to his feet and began to walk. Then he went with them into the temple courts, walking and jumping, and praising God.

In all probability, the lame man only wanted to keep living the life he was accustomed to. He was expecting alms (money) or something of sustenance from Peter and John. Peter and the man locked eyes. Peter wanted him to see, feel, and know the connection. He wanted him to know that the gift he would receive was greater than all the money in the world. As we find out, God had something much more important in mind. Interestingly, Peter set an example for all churches to come.

“It is not the Church’s business in this world to simply make the present condition more bearable; the task of the Church is to release here on earth the redemptive work of God in Christ.”
William Sanford LaSor

Peter had grown so much from the quick-tempered, often abrasive Simon he used to be. After witnessing Christ’s rise at the time of Pentecost, he stepped up as the “rock” Jesus called him to be. He and other apostles were given the gift of healing through faith. Peter wisely took advantage of the gathering crowd from the miraculous healing. Ultimately, he knew that the miracle in itself would bring no one to Jesus, but it definitely generated interest. He used that moment.

While the man held on to Peter and John, all the people were astonished and came running to them in the place called Solomon’s Colonnade. When Peter saw this, he said to them: “Fellow Israelites, why does this surprise you? Why do you stare at us as if by our own power or godliness we had made this man walk? The God of Abraham, Isaac and Jacob, the God of our fathers, has glorified his servant Jesus. You handed him over to be killed, and you disowned him before Pilate, though he had decided to let him go.

Though they were greatly amazed, surprised, and astonished, they weren’t saved. The crowd reasoned that Peter made the man walk from Peter’s own power and his piety. Peter, in his bold Peter manner, demonstrated he was not afraid to confront their sins. In many ways, Peter’s sermon to the temple crowd was more monumental than the miracle he delivered. People can see miracles but it takes hearing the word of God and repentance to gain faith.

You killed the author of life, but God raised him from the dead. We are witnesses of this. By faith in the name of Jesus, this man whom you see and know was made strong. It is Jesus’ name and the faith that comes through him that has completely healed him, as you can all see.

Jesus healed numerous people when he walked this earth, so why is it unreasonable that he would continue to heal from heaven? The crowd at the temple was familiar with Old Testament rules. They knew about the Prophets. They believed in following the laws, but they still hadn’t accepted their promised Messiah. Many were directly or indirectly responsible for their role in Christ’s sacrifice. Peter was making them look in the mirror.

But this is how God fulfilled what he had foretold through all the prophets, saying that his Messiah would suffer. Repent, then, and turn to God, so that your sins may be wiped out, that times of refreshing may come from the Lord, and that he may send the Messiah, who has been appointed for you—even Jesus.

The Prophets pointed to the fact that there will be a servant of God who will deliver the Jews and gentiles. In no uncertain terms, Peter pointed out that this servant would eventually be dealt with harshly and sacrificed. Peter boldly exclaimed none of what he was saying should be a surprise. The crowd might have been faithful to Mosaic law. They believed in Yahweh, their God. They had turned from being pagans. Peter wanted them to repent and turn again. To recognize and accept Jesus Christ as Messiah. To turn all the way around.

Peter asked that they turn aside from sin and turn to God with faith. Some translations render this phrase as, “flee to God,” as fleeing from our former ways to God’s grace.

When God raised up his servant, he sent him first to you to bless you by turning each of you from your wicked ways.

Turn. Until the miraculous healing, the lame Beggar was in a state of helplessness, like so many souls in our world that go day by day existing with no sense of hope. Imagine the futility of a world without belief in something greater? The lame man turned to something much bigger than he ever hoped for, dreamed of, or thought he needed. Through Peter, Jesus showed him that he is capable of having so much more. We are often ready to settle for much less than God wants to give to us.

Turn. The temple crowd turned from their self-righteous ways to believing in a Savior they once denounced. They turned from thinking their acts and works in the law would be enough to satisfy their requirements for righteousness. Seeing the miracle Peter presented cracked their armor, but it was the message in his sermon, the word of God, that led to their repentance.

Turn. Earlier in this devotional, I mentioned the people who carried the lame beggar to the temple gates every day. Did they do that out of obligation? Were they coerced? I don’t think so. A handicapped poor person in those days didn’t wield much power. They showed faith in action. This was Jerusalem and they knew that Jesus used to perform miracles in that area. Maybe they were expecting something from his disciples? Carrying the man to the temple every day showed righteousness reflected from faith not just works.

There is a season for all things in our lives. Let’s turn to Christ for answers, hope, and rest.

For everything there is a season, and a time for every matter under heaven: