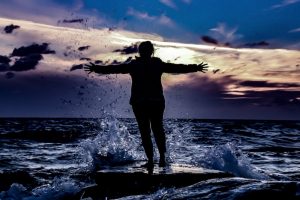 We will conclude our monthlong study of healing in Scripture with some real life examples of God’s healing. Jesus willingly accepted suffering, intense pain, and unjust punishment as a substitute for us. Jesus was wrongly accused and suffered without fighting back in order to fulfill His purpose. Verse 1 Peter 2:24 describes exactly that purpose.

“He himself bore our sins in his body on the cross, so that we might die to sins and live for righteousness; by his wounds you have been healed.”

Jesus wore our sins all the way to the cross. His sacrifice freed believers from the price of our own sin. He was tortured and humiliated so we could be spiritually whole — healed from the curse of sin and death and eternal separation from the Father.

Sweet Harmonies
A close friend of mine who used to sing in our choir has endured several years of painful illness, hospital stays, and medical procedures. Early on, she confided that she had serious diabetes. All I knew about that dreaded disease was that it effected how the body functions and the health of several major organs.

My friend is one of the kindest, gentlest people I know. She has such a beautiful voice. She could harmonize like a songbird in springtime. Her smile and personality is warm. I used to love talking with her after church about her family, her life, her singing.

Unfortunately, due to her diabetes, she suffers regularly. She has had part of her foot amputated. She lives with constant healing problems. Her wounds stay open for months. One day, I heard that she had a stroke. My wife, our church, and I were devastated. Her diabetes made sure that her healing would be long and difficult.

My friend’s voice was changed forever. She still had a sweet sound, but it was shallower, a little weaker, and not as smooth as before. Her heart wasn’t performing well either. A few years later, she suffered from chronic heart failure. After a few more hospital stays, she started coming back to church. She was no longer singing, but she was there worshipping with us.

“I’m going to fight,” she told me. “But if the good Lord wants me home, I’m going. I’m at peace with whatever He wants.”

She has had several more bouts of illness and emergency trips to the hospital. She still attends church. Most importantly, her faith, her determination, her trust in God has given her healing that no medicine bottle can provide. I believe that despite her constant mortal discomfort, she is smiling on the inside. I know because she is always smiling on the outside. She is God’s light in beautiful human form.

Don’t Feed them Mammals
I once met a great man who’s spirit and love surrounded him like a bubble. He was an articulate, soft-spoken, and generous personality. We were supposed to entertain his wife and him at our house but plans changed and we decided to meet them at an open air street market.

Neither my wife nor I knew what kind of spiritual beliefs they had. We didn’t know much about them at all. I was debating in my mind how and when to mention that I’d like to say a blessing before our meal when he blurted out, “Do you mind if I say grace before we eat?” That said volumes about him.

We spent almost two hours at this market talking about everything. One thing we discovered is that he contracted Alpha-gal syndrome from the bite of a Lone Star tick. He went through Hell and back until he was eventually diagnosed. Alpha-gal syndrome has been identified as a type of food allergy to red meat and other products made from mammals.

For several years, he’s been on a strict diet, has endured headaches, stomach pains, and a variety of other ailments.

My wife told us that she was going to prepare a very thorough mammalian meat-based meal at our home so it sure worked out that the plans changed.

A year later, we met them again at our house. This time, we talked for nearly 4 hours about nothing. About everything. Mostly about God’s goodness and grace. We speak or text regularly and I have the utmost respect for him. If you didn’t know his history, you would say that he’s one of those lucky guys who get all the breaks. He’s one of those guys who some might say doesn’t know adversity. Well, he does. He lives adversity every day. He has been redeemed from adversity to the glowing loving soul that is visible to all.

Soul on Wheels
A few months after my wife and I moved to North Carolina, we were introduced to a small “Life” group. It’s a Bible Study group. The folks in the group were welcoming from day one. We felt like family. There’s a young man, about the age of our son, who is also in the group. Despite the fact that he’s the junior guy in our group, he loves to joke and contribute. He’s a huge sports fan and there’s no doubt about what teams he likes — and doesn’t like.

I was drawn to his humor and gentle personality. Turns out, this guy likes fishing more than I do. He lives and breathes for fishing. We have fished several times together and pretty much every time we have small group, he asks me when we’re going again.

He has graduated from high school and works part time at a local grocery store. That basically gives him the money to buy more tackle for his habit. We constantly rib each other about our favorite NFL teams.

During our Bible studies, I will often sneak glances at him to see if I can tell what he’s thinking. He’s always sensitive to his friends’ needs. Each week, he brings up someone else who is in desperate need of God’s healing. Rarely, does he ever mention his own needs. This young man doesn’t earn a huge paycheck, but he gave me a Cabella’s hat for Christmas. I wear it proudly as often as I can.

You can visibly see Jesus’ glow emanating from his wheel-chair bound body. My friend has Cerebral Palsy but the way it affects his soul and Christian life, you’d think he had the sniffles. He shines God’s light brightly. We’ve talked about our wishes and dreams, and I can honestly say, that I wish I had more of his faith. More of his hope. More of his healed soul.

Go Out and Baptize
My mother-in-law is one of the few key people who pointed me towards God’s calling. She chipped away at my sarcastic and jaded armor. I said I believed, but I had no relationship with Jesus Christ. She laid it on pretty heavy and I resisted again and again.

Eventually, our arguments became discussions. Our discussions became lessons. Our lessons became awakenings. Seven years after my wife and I married, we found out we were having our first child. The day after we brought our son home, my mother-in-law informed us that her cancer had returned and it was in her liver.

The next time we visited, the topic of Baptizing our son came up. And the time after that. My wife and I had planned on having our son Baptized but we were in no rush since we didn’t even have a home church.

My mother-in-law was fading too fast. We spent as much time as we could, also dealing with raising our first child. We decided to have my wife’s family Pastor Baptize our son at their home. My mother-in-law couldn’t communicate very well at that point, but you could see the gleam of happiness in her eyes witnessing her Grandson’s Baptism. A day later, six weeks after our son was born, she passed.

There was more grace, pure belief, and goodness in this one body than I’ve ever seen in anyone. She believed and lived for Jesus’ resurrected body. I know she is healed.

Therefore go and make disciples of all nations, baptizing them in the name of the Father and of the Son and of the Holy Spirit.
Matthew 28:19

Peter told us that by Christ’s wounds we have been healed. You might wonder, healed from what? We shouldn’t presume that Peter was talking about healing from physical illnesses only and then apply his statement to every current ailment.

If we assume this means that God will heal every one of our ills, that says more about what we want from God rather than what he is revealing to us. We will experience perfect physical health in the tearless, painless world of the resurrection, but cannot expect this claim in our temporary present world.

We are healed, forgiven by the suffering wounds Jesus endured in our place. Consider that this reference might be pointing to our spiritual condition as well our physical one.