Search the Heart and Test the Mind

Home | Weekly Devotion | Search the Heart and Test the Mind

Search the Heart and Test the Mind 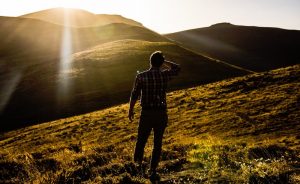 Reading Exodus 32 this morning, I was dumbfounded when I came across Aaron’s reply to Moses about creating the golden calf in his absence. Moses had gone up the mountain to talk with God and to listen to God’s commands. Apparently, the conversation took too long for Moses’s people because they started complaining to his brother Aaron. To appease them, Aaron made a hasty decision and created a golden calf as a substitute god for the disgruntled people.

Not only did they worship and sacrifice to a false god, but they placed faith in their own satisfaction from a temporary solution.

“And Aaron said, ‘Let not the anger of my lord burn hot. You know the people, that they are set on evil. For they said to me, ‘Make us gods who shall go before us. As for this Moses, the man who brought us up out of the land of Egypt, we do not know what has become of him.’ So I said to them, ‘Let any who have gold take it off.’ So they gave it to me, and I threw it into the fire, and out came this calf.'”
Exodus 32:22-24

Really? “…and out came this calf.” No disrespect to Aaron, but I think that’s one of the thinnest excuses I’ve ever heard. Aaron was the chosen High Priest of Israel and blessed by God. That doesn’t mean that Aaron would escape God’s punishment later.

Aaron would never enter the Promised Land and died in the wilderness. He suffered from the loss of two of his adult sons from God’s judgement and endured many difficulties in his life that could be seen as punishment.

The purpose in this week’s devotion is not to scare or warn you about God’s wrathful punishment should we stray or sin. We should follow God’s Laws because of faithful obedience not out of fear. This devotion is focused on taking note of what the Bible says about being accountable for our actions. In our volatile world, it’s too tempting to blame someone else for global or national crises. If something is unfair, it must be someone else’s fault. Sometimes that’s the case. But most of the time, we don’t own up to our individual behavior, lack of insight, or just bad judgement.

Think about calm and positive people in your life. Even with ups and downs, they’re usually able to react to challenges in life with a sense of perspective. Then, there’s the people you know who create their own drama. There is always something wrong, always a problem, always the object of someone else’s malice. God wants more for us. He gave us the tools to rise above the confinement of this behavior. He knows, that WE know better.

“Bear one another’s burdens, and so fulfill the law of Christ. For if anyone thinks he is something, when he is nothing, he deceives himself. But let each one test his own work, and then his reason to boast will be in himself alone and not in his neighbor. For each will have to bear his own load.”
Galatians 6:2

Every human being at some point in their life will have burdens to bear. Like it or not, no one can take our burdens from us. Our burdens are our own, but we don’t need to hide them from others. We carry the weight of our own burdens and lighten the load of our brothers and sisters.

The Priest/Prophet Ezra prayed fervently for his people. They had, “broken faith” with God and desired a new covenant with Him to regain favor His favor. In direct and unambiguous terms, Ezra laid it out for them. “It is your task… be strong and do it.” Ezra clearly told them where their responsibility falls. Breaking a bad habit or correcting a wrong takes humility and something bigger. It takes courage. This kind of courage comes from repeated behavior and faith in God’s plan for us.

“The Lord said to Cain, ‘Why are you angry, and why has your face fallen? If you do well, will you not be accepted? And if you do not do well, sin is crouching at the door. Its desire is for you, but you must rule over it.'”
Genesis 4:6-7

God had rejected Cain’s offering. In this passage, God’s question hints that there was no logical reason for Cain to feel sorry for himself. God needed Cain to own his feelings about being rejected. He also wanted Cain to know that he would be accepted if chose a better path. Sin is crouching, is persistent, and is deceptively subtle. God warned Cain that it would rule over him if he wasn’t aware of it.

In practical terms, Cain murdered his brother and blamed God for making him angry enough to do it. We are the created, not the Creator. We are not in control of the big plan of our life. We will never know how long we will live. More than likely, we also will never know why most of the bad things in our life happen “to us.” We can however, decide to control our actions and reactions to things that happen “to us.” As believers, we need to make sure that we accept blame and reward for our actions in life.

It’s time to carry our own weight and the weight of others. Only one person will stand in front of God in our place. Jesus died on the cross for this purpose. He knows what’s in our hearts and minds. He knows what our intentions are and He knows whether we repent or deny our flaws. Jesus has given us an open door to be honest with Him. We must first be honest with ourselves.