One is the Holiest Number

Home | Weekly Devotion | One is the Holiest Number

One is the Holiest Number 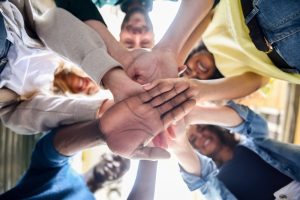 13 books in the New Testament are attributed to the Apostle Paul. Before his conversion to being a prolific and passionate Christian, he was a Jewish leader zealous for the persecution of Christians. What a twist. He hated followers of Jesus. He ordered the death and destruction of many of them. According to Acts, he approved the stoning of Saint Stephen, the first Christian martyr. Not long after, he we was literally blinded by the light of Jesus Christ.

Paul wrote Galatians while imprisoned in a Roman jail around 60–61AD. Lacking freedom, comfort, and a certain future, you would think he would either be bitter or self-pitying. Most people wouldn’t be able to think straight, let alone be inspired to write one of the greatest letters in human history. Paul was a Jewish celebrity of sorts riding the highest of highs before his conversion. After, he suffered multiple imprisonments, stoning, a venomous snake bite, a shipwreck, and seizures.

“I therefore, a prisoner for the Lord, urge you to walk in a manner worthy of the calling to which you have been called, with all humility and gentleness, with patience, bearing with one another in love, eager to maintain the unity of the Spirit in the bond of peace.”
Galatians 4:1-3

The writing of Galatians 4 doesn’t have the tone you would expect from someone with Paul’s life experiences. Something bigger than Paul was at work behind his writing. Christians believe that while the Bible was penned by humans, it is the inerrant and inspired word of God. God-breathed.

The church in Galatia had some critical problems Paul was bent on fixing. There was a harsh divide between the Christian Jews and Christian Gentiles of that church. Many in that church refuted the legitimacy of Paul’s apostolic calling. Paul unpacked his apostolic credentials and reiterated the proper Christian way of things. He was drawing a line between some of the legalistic Jewish Christians following Old Testament ways and the sinful nature of some of the Christian Gentiles who believed their new freedom was a license to sin.

“Paul’s aggressive tone shows just how important it was to him that the people embrace unity in Christ, no matter their racial distinctions.”
Chuck Swindoll

If you’re a member of a church body, you understand the complex dynamic of the congregation. All in the body might be loosely focused on the same vision, but there is also a potential for a variety of goals, methods, and desires. Even smaller churches fall into this category. As human beings, we’re going to disagree and argue. We will have conflict. Healthy church bodies remember that the important thing is to remember the important thing.

“There is one body and one Spirit—just as you were called to the one hope that belongs to your call— one Lord, one faith, one baptism, one God and Father of all, who is over all and through all and in all. But grace was given to each one of us according to the measure of Christ’s gift.”
Galatians 4:4-7

This lesson needs to be applied to our society today. There are serious divides in our lives. Media, social networks, and stereotypes have exacerbated the problem. Mainly because we let them. Do we remind others that while different, we are truly one body? Do we remind ourselves that our oneness and hope is congealed in Jesus Christ? As members of a body, it’s tempting for us to feel anger, envy, and fear. As a representative of the body, try understanding. Try love.

Swindoll continued, “Paul’s letter speaks wisdom and clarity into the first real controversy that plagued the church in its early years—the relationship between Christian Jews and Christian Gentiles.” Through the Holy Spirit, Paul felt strongly enough about this problem to attack it head on.

“…Until we all attain to the unity of the faith and of the knowledge of the Son of God, to mature manhood,[e] to the measure of the stature of the fullness of Christ, 14 so that we may no longer be children, tossed to and fro by the waves and carried about by every wind of doctrine, by human cunning, by craftiness in deceitful schemes.”
Galatians 4:13-14

What would Paul write to “Americans” in 2020? It would probably be an extremely long letter. The power is within us to unite for a common good. God has given us this gift in Jesus Christ to cure all ills. We have a completely free and perfect future in front of us, that is fully paid for. That is the good news. THIS should be the motivation for our earthly good. We have a new lease on life, why doesn’t that show in our behavior? Just getting along isn’t enough, it’s superficial. We need relationships and compassion and love. When we all seek the same prize, the petty disagreements become irrelevant.

I am always amazed at Paul’s writings. His clarity of vision in passing on scripture to his contemporaries shows an unparalleled gift. Paul’s thoughts were so perceptive that they’re still understandable today. Unfortunately, they’re still applicable today too.

“Let all bitterness and wrath and anger and clamor and slander be put away from you, along with all malice. 32 Be kind to one another, tenderhearted, forgiving one another, as God in Christ forgave you.”
Galatians 4: 31-32

Paul wrote a lot about conflict. Human nature breeds it, making it timeless. The Christian churches of the mid-first century mostly managed to rise above their divides and have led the way to churches across the world 2000 years later. The ongoing legacy of the Holy Spirit of God has nothing to do with our differences, it has everything to do with what unites us. We are One in the Spirit.